Tere O’Connor is going to be in Seattle next week! Velocity partners with On the Boards in a celebration of master American choreographer Tere O’Connor, culminating in performances of his seminal works BLEED, poem, Secret Mary, and Sister. As part of this educational/community partnership, Velocity and OtB host Irreconcilability, nine days of activities focused on O’Connor’s influential views on dance and contemporary culture. As we anticipate this exciting series of events, we re-post Claudia LaRocco’s interview with O’Connor, originally posted on dance-tech.tv. 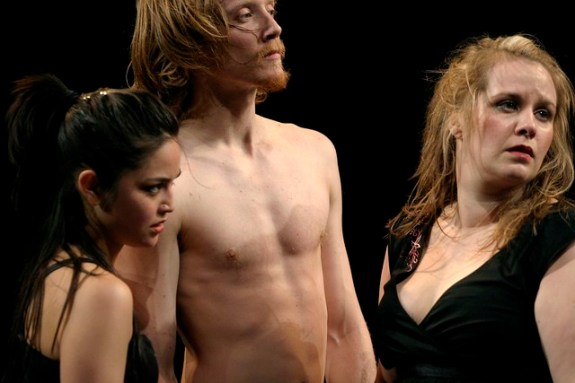 One of my biggest desires is to have people finally see that you can be at once conceptual and formal; that is what I’m trying to do. These two things are not polarities, they are converging in my dances. My work contains a fully embodied critique of the form—every second of it does.

Tere O’Connor has been outspoken about his disinterest in the mantle of “master,” and all of the modern dance politics and hierarchies that come with such a title. Fair enough. And yet, few contemporary choreographers have left more of a mark in recent years than this fiercely intelligent American artist. He began making dances in 1982; his impressive body of work is furthered by his far-reaching influence as a teacher (of professionals and university students), and his consistent public forays into issues facing the field. Speaking with him, like watching his choreography, is an education of the best kind. –CLR

CLAUDIA LAROCCO: As a choreographer, are you in conversation with poetry? Do you feel that you share things in terms of your structural approach and the inner logic of your dances?
TERE O’CONNOR: Yes. Absolutely. The poetics of dance are something I use to kind of pull myself out of the weighty history of dance. The last four pieces have been attempts to bring poetics to the fore as a root metaphor for choreographic thinking. I really try to trust poetics over logic. I think logic and comprehensibility have been foisted on the form as aspects of a value system that congratulates the finite. Even in the mind of contemporary dancemakers there is often a conflict of this nature.

It sounds so hippy, but I’m really trying to embrace the mysterious elements of the form. I realize that I’m not in the studio thinking “how can I make sense of this thing,” but more like “what is this thing that is coming at me?” It’s about undoing a certain construction of meaning, and I find a lot of support for this in the land of poetry.

CLR: Is there any particular writer you relate to in this way?
TOC: John Ashbery, definitely, and Adrienne Rich and Rene Char and Rimbaud. These poets all write very differently of course. I think I am more in dialogue with poetics as related to choreography beyond specific usages by writers. The way that words are recontextualized inside of poetry, wrested from their quotidian usage and oriented within this other framework is really akin to what’s happening with the elements of a dance. All these different ideas and enactments that get pressed next to each other in a dance, coexisting outside of an accumulating, digestible narrative and creating a separate poetic system within each dance

CLR: What is your relationship to Baby now, five years after the fact?
TOC: I look at it and I think, wow, it was really a step back into dance that happened very naturally. I feel happy about that. And then I just look at how it relates to some of my earliest work; the things I did accidentally when making work as a young person, I did more knowingly with this one. The concept for ‘Baby’ was that every idea can be brand new, there can be a string of ideas, and what that gives birth to is a baby—this thing that has potential, not a thing that is finished. And the potential for it to grow is in the viewer’s mind. I wanted to allow this thinking to reside in the structural conceits that I use.

I was also working with the idea of inclusive editing—keeping everything. A couple of people I had known were having chemotherapy and having to work at the same time, and I thought it was inelegant of me at the very least to be able go to work and cut out the things that I didn’t like. I started to see structure and editing as political containers, more reflective of ideas than the surface imagery employed in a dance. I was moving away from trying to be masterful, attempting to be more an observer of the form. So, the idea is that everything you see just needs to find a context, it doesn’t need to be cut. Everything I make during a given rehearsal is part of that piece. Cutting things I don’t like may be more about me than about the dance.

CLR: Can you talk a bit about the relationship of conceptual and formal?
TOC: One of my biggest desires is to have people finally see that you can be at once conceptual and formal; that is what I’m trying to do. These two things are not polarities, they are converging in my dances. My work contains a fully embodied critique of the form—every second of it does. It is based in a constant concept of otherness that shapes all of my work. One of the strengths of dance, and why I’ve gone so fully back to movement based dance, is that concept doesn’t appear as a depiction of itself in the work. The concept is a process, and a portal into the work. Whereas there’s a lot of work right now which presents itself as conceptual by basically saying: this is my concept, and here’s a dance that is born of it and sticks solely to that concept and attempts to prove the concept. I feel that is a structural position born in representation, something which a lot of those works are ostensibly trying to reject. 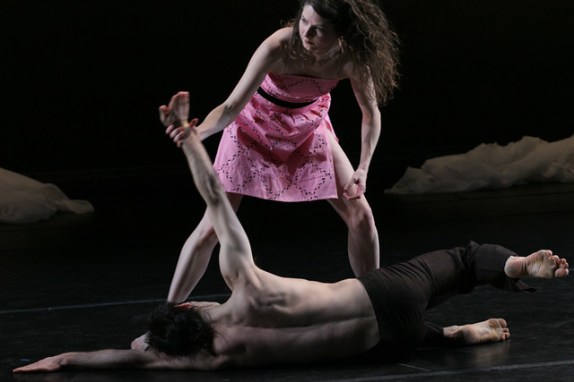 CLR: Can you talk about your ideas about the passage of time within a work like Baby?
TOC: I’m trying to entrust the concept of time with the job of choreographer, in so much as the speed at which the images come at you; the fact that sections come and go, or even the building of one movement to the next—the less I control these the more it takes on a whole other kind of identity that isn’t mine. It also deflates the tyranny of the choreographic voice, allowing the viewer to engage his or her memory and sense of expectation. The two of these things braided together create a specific choreography for each viewer. I don’t want to get in the way of that.

Dances like Baby and Rammed Earth and Wrought Iron Fog look at the nature of consciousness, how it deals with forward-moving time and circular time and the present and how all these parallel chronologies coexist without a desire for resolution. We choose to reduce this kind of phenomenon out of a need for cogency, creating miserly readings compared to the larger potential of consciousness. There are so many iterations of what any one thing can mean based on history, derivation, place, language, and on the history of each human being. If you were to give all of this voice—as I think choreography can—only then would you be talking about consciousness.

I have voiced unhappiness about ideas of surrealism and the absurd being leveled at dance as choreographic styles. I really think that surrealism is embedded in the DNA of dance; it is absolutely what dance is made of. Beyond that one chooses how to shape it and guide it. These ideas are not absurdist, they’re really an alternative vision of how consciousness may be experienced and constructed.

Knowing isn’t a stopped place, it’s an explosion. Abstraction can diffuse information, almost like a spray, inside your mind. That’s why I fight so much against theme and variation. Just take out theme and trust variation, that’s all there is. This idea of theme and variation is one of the constraints of the last century, and still rests in the minds of a lot of artists, we get these things driven into our heads, as if there is some kind of moral that exists in bringing back recognizable elements in a dance. But if you could, for example, go back and remember everything you thought of since you got up this morning, there would be no theme. I don’t think the mind makes or craves themes, I think the society makes them.